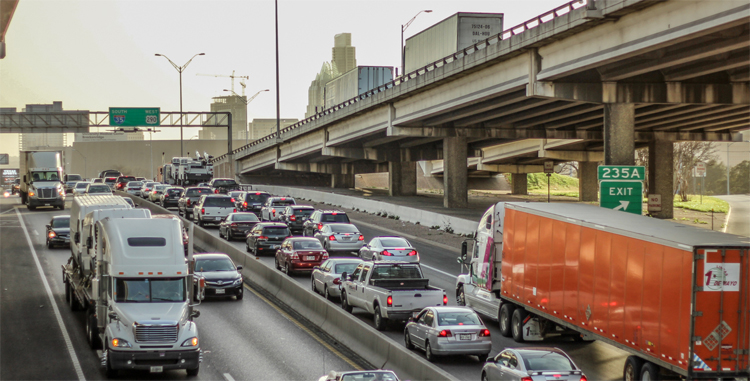 Traffic on I-35 in Austin, Texas. Photograph by Cassie Gallegos.

I love to study transportation and I love to study cities.  The two biggest sections of my 55,000-book personal library are transportation (especially rail) and urban studies & architecture.  I have traveled to 49 states and 45 countries riding subways and walking and photographing cities.

I believe clear thinking about Austin’s transportation needs must realistically reflect our context.  Context, as is often the case, is very important but often under-emphasized.

Austin is a 20th and 21st century American sunbelt Texas city.  It is one of the great American boom towns of this era.  It likely will continue to be a boomtown for many years, probably eventually forming a twin city with San Antonio, not unlike Dallas-Ft. Worth, San Francisco-Oakland, or Washington-Baltimore.  This would never have been true had Austin not been in the sunbelt or not been in Texas.  If Austin were in the midwest, it would be Madison; if it were on the west coast it would be Berkley; in neither case would it be the most exciting US city not on either coast.  But warmth from the sun has drawn people to the sunbelt, and a warm business climate (and a historically low cost of living including taxes) has drawn them to Texas.  On a firm economic foundation of lakes, hills, state government, and a great university, Austin has risen remarkably in the 32 years I have lived here.  Our five-county metropolitan area contains about 1.9 million people.  By 2050 that number will exceed 3 million, and including San Antonio over 7 million.

One of the attributes that comes with being a sunbelt boomtown in this era is amorphous, amoeba-like growth.  Change happens relatively fast, and our infrastructure needs to be as flexible as possible.  Apple or Boeing might build a facility Northwest or Southeast.  A new airport between Austin and San Antonio would change everything.  New houses are going up over here, then surprisingly over there at the opposite corner of the metropolitan area.

The highly visible (especially in the press and at city hall) concentration on downtown and density is only part of the story.  And perhaps not the biggest part of the story.  While there has been a wonderful resurgence in urban living in the US, from Times Square to Main Street, we should not forget that most growth is and will continue to be at the edges of the area, both here in Austin and around the sunbelt.

Especially at certain stages of life, many people prefer a placid natural private suburban homestead to a hectic concrete shared urban one.  People with young children or who place a high priority on school quality often prefer the suburbs.  With the rising costs of housing in the city of Austin, this trend may accelerate, leaving the city, much like San Francisco (and increasingly Portland), a ghetto of affluent people.  (It amazes me that people in Austin talk about building affordable housing but they really mean subsidized housing, which does nothing for affordability; in fact many of the regulations we enact make housing less and less affordable.)

On the other hand, if people live near their work, the total costs in time and energy are less.  This is often more easily achieved with suburban facilities and offices, especially if your employees have school-aged children.  All of these factors encourage continued dependence on automobiles for most of us in the sunbelt.

Today Williamson County, at over 450,000 the second most populous county in the Austin metropolitan area, has a greater population than the cities (city limits, not metropolitan areas) of Atlanta, Miami, Minneapolis, Cleveland, Tampa, St. Louis, Pittsburgh, or Cincinnati.  Round Rock will continue to rock.

This also means we need a regional approach to solving transportation issues: Bastrop, Johnson City, Marble Falls, Taylor, and San Marcos are all part of a greater Austin region, part of our “hinterlands.”  They will grow faster than many imagine, and increasingly become part of the Austin daily commuting zone.

Given this context, our transport systems must be flexible.  Adaptive.   Not fixed.  It is hard for me to ever imagine rail being a reasonable solution for transportation challenges in a city like Austin.  It is expensive, it is immovable, it is permanent and works best in very high density unchanging urban structures like New York.  People need flexibility in their local travel.  They need to stop at the store or the barbers or pick up the kids.  Even in many big cities with fine subway systems, ridership as a share of total trips and commutes continues to decline.  (About 5% of all US trips to work are made on public transportation, but the figure is much lower in sunbelt areas than New York or Chicago.  The 5% number continues to decline over time.)

It would also be great if we were truly creative.  We tend to think Austin is highly innovative, but (for example) some celebrate light rail, which my hometown in Indiana (and many others) had over 100 years ago, and later abandoned.  Sometimes it seems like we copy the latest fad from other US cities whenever possible, rather than thinking “outside the box” – or outside the track.  Here are a few ideas and examples of what I mean.

First, what is the problem?  I think we need to relieve rush hour congestion on our major streets and freeways.  If we can improve upon this in a meaningful way, we would reduce the time we waste sitting in traffic and we would reduce emissions and pollution.  Worthwhile, important goals.  So what would I suggest we look into to improve the situation?  We have spent or are discussing spending over $500 million on rail systems – might that money be more effectively used to solve or improve congestion and pollution?  What are some options?

My first thought is to reduce the number of people going to work at the same time.  If we got even the 4 or 5 biggest centralized employers (Dell, Freescale, UT, State Government, etc.) to have (say) one-third of their employees start work at 8, one-third at 9, and one-third at 10, traffic would be substantially reduced.  Encouraging work at home days would further improve the situation.  Organized, co-ordinated efforts would yield bigger results.  While we might be able to achieve this from the bully pulpit and through persuasion, we could also give incentives to the employees and/or employers, without spending nearly $500 million of taxpayer funds.

My second thought is Electronic Road Pricing, or ERP, as seen in Singapore.  Regular highways (with no toll booths and no need to slow down) use a dynamic system to adjust road prices to match the circumstances.  It might cost $3 to drive on MoPac Expressway at 8 a.m. but only 50 cents on Sunday afternoon, then higher when there is a Sunday downtown marathon happening.  The system seems to work like a charm in Singapore.  You can do it with selected lanes or with an entire highway.  An investment is required, but it should pale in comparison to building rail. 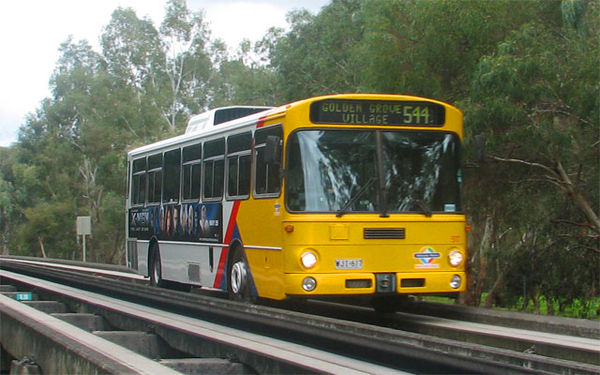 A Mercedes-Benz O305 on the O-Bahn guide-way.

Third, it is hard to beat busses for efficiency and flexibility.  Our new MetroBus system is a step in the right direction.  But study the high speed urban bus lines like Bogota’s TransMilenio and Mexico City’s Metrobus – they need no fixed rail and no electricity to the entire route, both of which drive up costs.  Even more interesting to me is the O-Bahn Busway system in Adelaide, Australia, which allows high speed travel down the main corridor (like MoPac), but allows the lines to separate at the ends, allowing busses to run into neighborhoods or toward plants and offices at either end of the commute.  New routes are added to new sites with little or no additional capital investment.  This is powerful flexibility.

Fourth, there has been some enthusiasm for a ski-lift cable-car type transit system here in Austin or in Round Rock, modeled after the impressive system in Medellin, Colombia, which I have ridden.  It costs less than rail and can hop over rivers and other obstacles.  I am not sure if this is right for us, but innovations like this, from around the globe, are certainly worth a serious look.  Asia is probably the bus center of the world (see Hong Kong’s outstanding private city bus system).  Whenever I return home from Colombia or Mexico, I feel like we are far behind in many ways.

Fifth, we need to make much greater use of shared vehicles and “para-transit,” including taxis and jitneys.  While we must treat the existing taxi companies and other transportation providers fairly, having more competition and choices from entrepreneurial transport companies would strengthen our system.  A serious free enterprise jitney service (flat rate hop on and hop off) running up and down Lamar, Congress, or Burnet could be very powerful.

Sixth, and perhaps most important, creative, agile entrepreneurs are more likely to innovate and meet emerging customer needs than government bureaucrats.  If our food distribution system or our restaurant system were designed by the federal, state, or city government, it is unlikely we would have Whole Foods Market, Central Market, the Wheatsville Co-Op, Uchi, or Taco Deli.  We need that kind of imagination at work in transportation; we need local versions of transportation innovators like Fred Smith (FedEx), Herb Kelleher (Southwest Airlines), and Richard Branson (Virgin Air).  We are already seeing it in Uber, shared SmartCars, and Zipcar – we just need more of it!

In the meanwhile, while we pour taxpayer money into consultants and expensive systems which serve limited numbers of people and which do not make a noticeable dent in congestion or pollution, we are also increasing taxes and the cost of living in the city, further driving growth in the more remote parts of central Texas.  Instead, let’s make Austin a truly, deeply innovative city, a city that leads, not a clone of Portland or anywhere else.

Photograph by Cassie Gallegos for Techzette.