Women learn the difference between serif and sans-serif fonts at a Girl Develop It workshop in January. Photo by Beth Cortez-Neavel.

At noon on a recent Saturday, women in their mid-20s to early 40s filtered into a small meeting room in South Austin. The 11 women, all there to participate in a two-hour Girl Develop It seminar and workshop, filled the three rows of tables and chairs facing front of the room with the word “Typography” projected on the wall.  A box of boutique decorated cupcakes sat on the front table.

Girl Develop It is an international non-profit organization that offers affordable classes to women who want to learn software development, like coding and web design. This particular Saturday, the workshop was centered around the basics of type layout for the web. Katie Kovalcin, an Austin web designer and Girl Develop It teacher kept the attendees engaged the entire session.

Some of the women in the room were web developers and designers, others were creatives looking to learn a bit more about the design and tech world, a few work in local start-ups and at least one was new to the Austin tech scene. The workshops’ full capacity attendance is a good sign for Austin, and the tech industry in general.

Girl Develop It’s goal is to empower women to explore the tech industry – a field that is becoming increasingly dominated by men.

According to the National Center for Women and Information Technology, the number of women involved with or interested in tech jobs and the computer sciences has been declining, and the Austin community is no exception. One of the main problems: not enough women are being recruited into the industry.

Kovalcin said the Girl Develop It workshops are important because of their accessibility to women both in and out of the technology sphere. Some women can get intimidated by tech meetup groups that are male-dominated and potentially too advanced for a beginner’s skill level.

“[Girl Develop It] is not scary,” she said. “It’s a great resource to start out.” 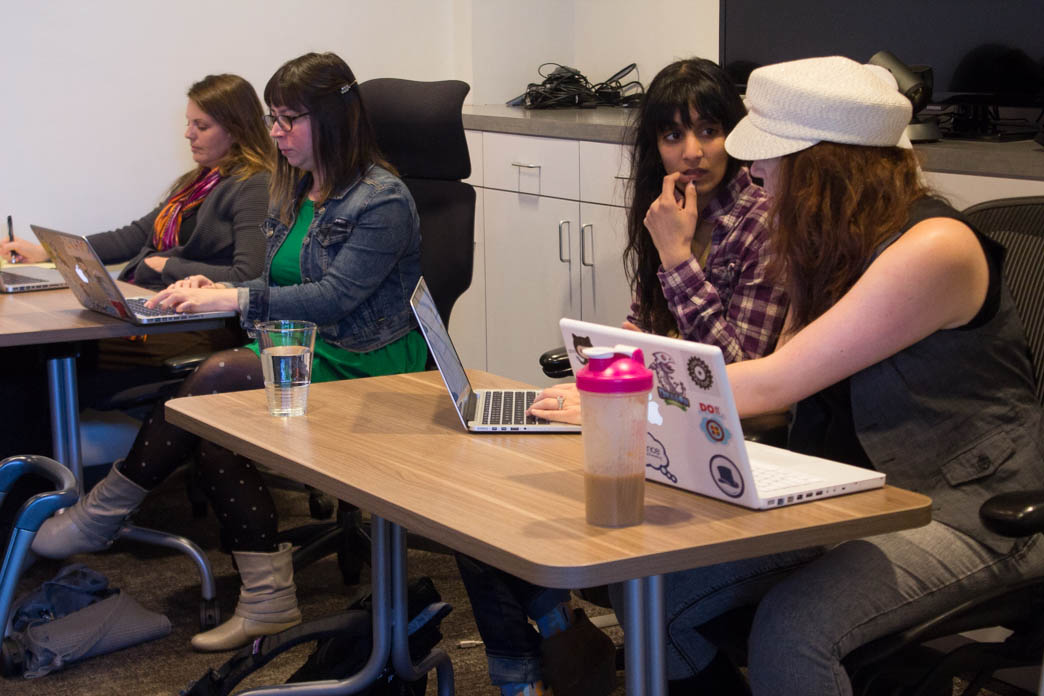 Women browse the web and chat during a Girl Develop It typography workshop.

Sara Chipps and Vanessa Hurst founded the organization in New York in 2010 because as Chipps wrote on the organization’s site, “the development community could use a few more ladies.” The Austin chapter, one of 25 throughout the U.S. and Canada, started in June 2011. Most of the Girl Develop It leaders and teachers work as either front-end or back-end developers at other companies and devote their spare time to sharing their knowledge with the local community.

Information and technology are the fastest growing industries in the U.S. and global economy, according to the Center’s 2010 report, in fact they’re growing more than two times as fast as the average for the growth of all occupations. The U.S. Department of Labor even predicts that by 2018, there will be more than 1.4 million computer and technology jobs available.

But the people interested in the industry as a whole is dropping, a lot of which is  coming from a loss of women in the field. If this trend continues, by 2018 the industry won’t be able to fill half of the available jobs. The number of women in tech has been steadily declining since its peak in 1991 when women made up 36 percent of the workforce. The same study shows that the industry continues to have a large pay wage gap between the genders, and women are leaving for better paying jobs. But that isn’t the only cause of the decline. 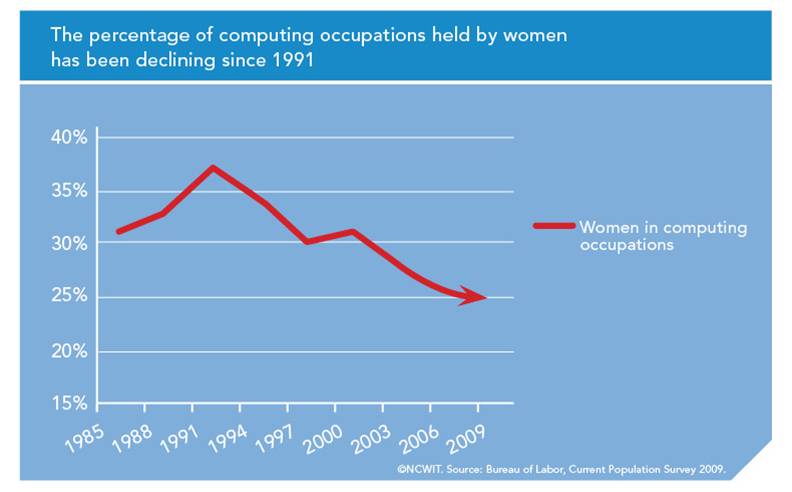 “You have to have women to hire in order to fix that number,” said Ashley Price, co-leader of the Girl Develop It Austin chapter

“The problem isn’t that the women left Austin. There just aren’t any.”

Price is a stack developer at an Austin-based back-up and recovery start-up called Spanning. Spanning has just under 50 employees, and while the male to female ratio is pretty evenly distributed throughout the company, Price said there are only two women in an engineering team of 10. She said it’s not from Spanning’s lack of trying – it’s because there isn’t a very diverse, qualified workforce to pull from in Austin. 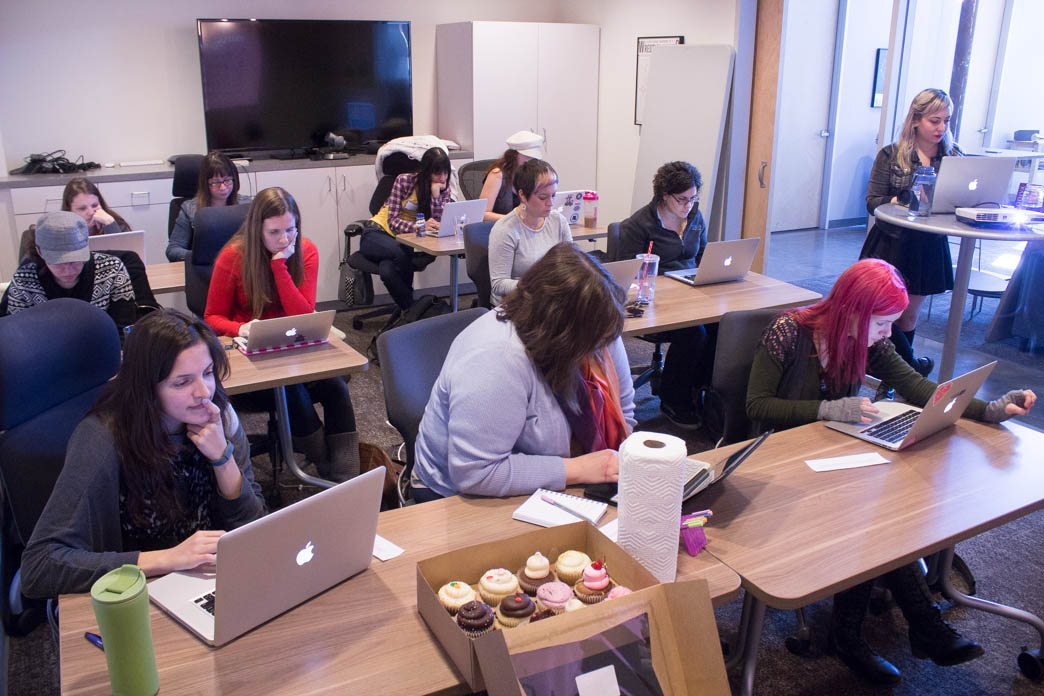 Women from all areas of the tech industry – or who are interested in tech – work on a small in-workshop typography assignment for fake clients as part of a Girl Develop It class.

The Austin Technology Council reported in 2013 that at least 26 percent of the jobs in Austin are supported by the technology sector, and that 57 percent of the Council’s 200 partnered tech companies find it hard to attract qualified staff due to the lack of applicants.

According to the Austin Technology Council, there are about 550 women in the tech industry that subscribe to their tech newsletter out of 75,000 individuals – about .7 percent

Price said having so few women in the industry is detrimental to one of the main points of software development – problem-solving.

“Women approach problems differently. Every background does, it doesn’t matter where you’re coming from.”

“Having a totally homogeneous looking engineering team is not a good idea – you’ll only solve problems one way,” Price said.

The same National Center for Women and Information Technology study reported that teams with equal numbers of women and men are more likely than teams that lean in any other direction, to experiment, be creative, share knowledge, and fulfill tasks. And this lack of diverse perspectives means those inventing the technology do not appropriately reflect the customer base, which is especially the case when women are absent from the field.

All-women groups like Girl Develop It are just one piece of the puzzle. Other groups like Women Who Code and Austin All-Girl Hack Night intend to increase the number of women interested and engaging in the tech community, but these workshops are usually for adults 18 years and older. A bigger solution, Price said, would be to start educating girls at a young age. She said the real problem is in STEM school curricula – science, technology, engineering and math. In Austin there are very few options for young women to explore to get excited about computer science and technology.

“I really don’t think there’s anything more important then showing people that it [software development] is actually a cool and fun job,” Price said.

Photos from a Girl Develop It meetup

Photos by Beth Cortez-Neavel for Techzette.com.