There is a greenish-white glow coming from a hole on the side of the warehouse wall ahead. It’s nearly midnight in a forgotten district of New York City – the streets dark, dirty, and deserted. You reach the door; your name checked off the list, a figure motions you in.

Not two steps in, your foot kicks something – a red bull can – the floor is littered with them. Light in the room is dim – except for the bright clusters reflecting off faces huddled around tables. Some are typing furiously; others stare at the ceiling in a trance of thought. A few groups are chatting together, their faces animated as they use their hands to deconstruct an idea. To your right, you notice the hint of a smile watching the success of a program running on a computer screen.

Propping open a laptop, you’re quickly introduced to the others at the table: a trio of Ivy League juniors, a high school dropout, a 31 year old Californian and a few other heads nodding in introduction. Throughout the room, individuals and small groups are engrossed, bringing their projects to life; a Wii remote that can conduct a laptop orchestra, an application to encourage friends-of-friends to help each other hitchhike. A team two tables away is building an app to solve their nagging difficulty of coordinating group messages – having no idea their overnight project will one day turn into a company sold for north of $43 million.

“I’ve been to 20 hackathons,” says Geoffrey Vedernikoff at HackTX, Texas’ biggest hackathon.  Pointing at the figure across the table. “But he’s been to 25.” Vedernikoff is a University of Pennsylvania student. “I help organize Mhacks and PennApps.” Pointing again, “He organizes HackMIT and he helps at Yale.” The animated individuals are from all parts of the country, speaking of weekend excursions as if they were a trip to the mall; a younger face mentions his plans to jump on a plane at eight in the morning headed to another hackathon.

Vedernikoff motions at a slim person bouncing into the room, “This is the guy you should talk to.”

“Hackathons are like gyms,” Dave Fontenot exclaimed, buzzing with energy and pulling his article on the computer screen. “10 years from now when you ask people where they learned to code, most will say at a hackathon,” Fontenot, serial hackathoner (he’s been to 22) helps organize MHacks – a hackathon so large it’s held in the University of Michigan football stadium.  “But you should look at Zain’s story on this. It’s incredible.”

“I learned by doing small project after project that I was very passionate about slightly outside of my skill-set,” Zain Shah shares in How I learned to Code. At PennApps 2013 – amidst a hackathon bender of 5 hackathons in 5 consecutive weekends – Shah built Mosaic, an app that would go on to win an Apple Worldwide Developers Conference design award. He has since taken part in the Summer Y Combinator – to hackers an organization more competitive and prestigious than Harvard and MIT combined. 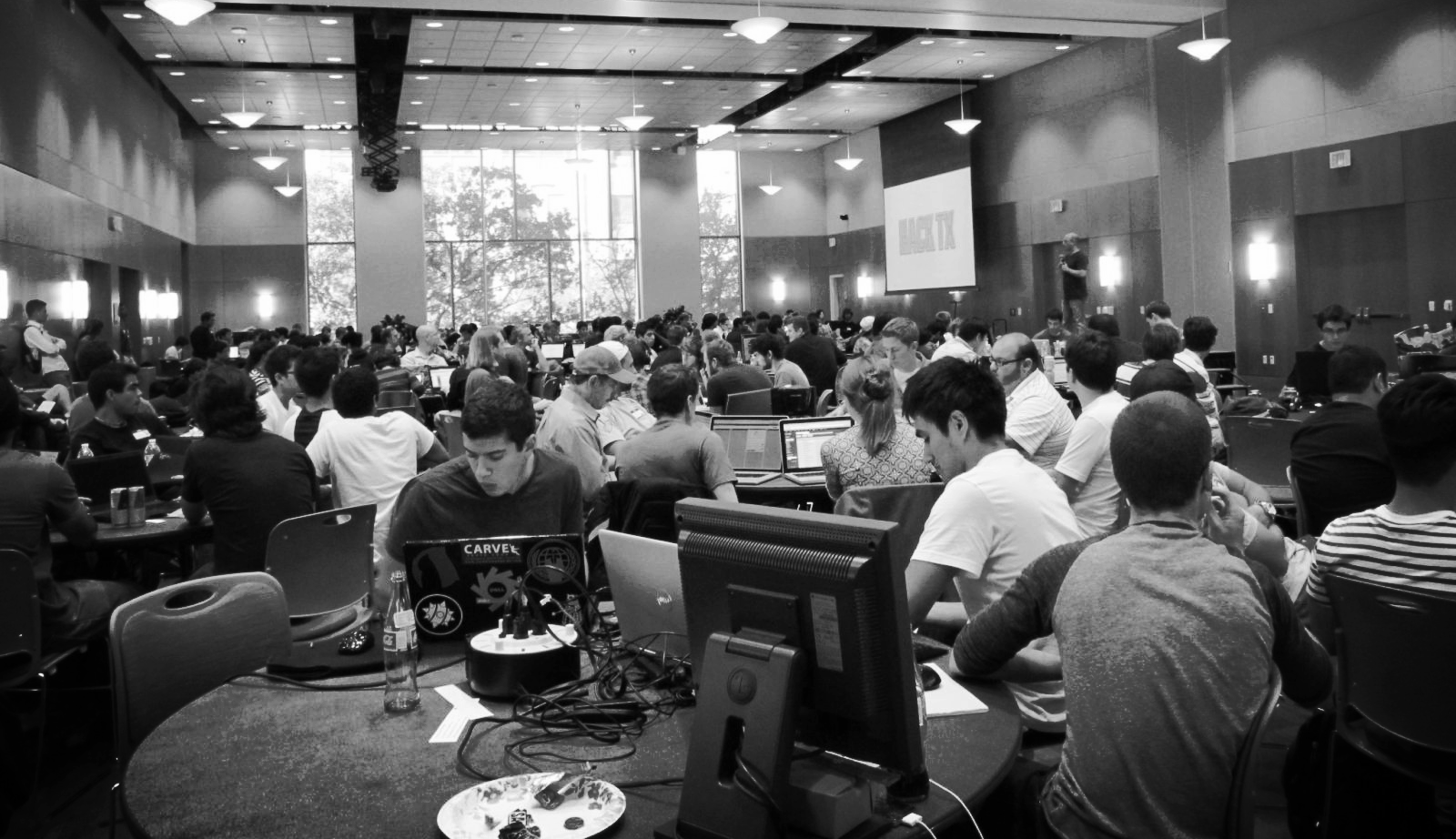 Forming Teams, Companies, and a Community

“There are students that work together that have never met before,” said Taylor Barnett organizer of HackTX. “You see [people] posting [on facebook], ‘Hey I know this, this, and this. I can code in this; I’m looking for a team to join.’”

Hackathons are like glue, bringing groups of entrepreneurs together. “Events like HackTX didn’t exist before,” says Barnett explaining how the growth of HackTX is positively affecting the Austin tech community.

These all-nighters create long term connections, a value evidenced by the companies and startups grown out of them. Take PageVamp, a company built out of a second place finish at PennApps – a University of Pennsylvania Hackathon. Fred Wang, Pagevamp CTO, has been actively hackathoning for over 5 years, seeing success many times at PennApps.

“A big part of the hackathon is the people there and the energy,” Wang said. “You’re in this together with 500 other people. Having that environment, it’s like, ‘Hey you’re not in this alone.’”

The Distillation of Doing

The temperature drops; there’s a chill in the air. Conversations have stopped; the room is justifiably quiet. Those unable to push through are scattered throughout the building, sound asleep. Of the hackers still awake, life can be seen radiating from their eyes; nothing can steal their focus.

“After a certain time you get this spark of creativity,” said Wang, describing this experience. “You just know exactly what to do. You have been looking at the same code for the past 20 hours.”

This Zen-like moment might be what is termed “Flow” by Mihaly Csikszentmihalyi in his book Flow: The Psychology of Optimal Experience. “Being completely involved in an activity for its own sake. The ego falls away. Time flies. Every action, movement, and thought follows inevitably from the previous one, like playing jazz. Your whole being is involved, and you’re using your skills to the utmost.”

Under constraint they are constantly hitting unanticipated bumps; these moments force the opportunity to toss out all which is not essential.

“At 4 a.m. you think, ‘Well shit, there are all these features we only sorta wanted to build, and when it comes down to it’s really about this core functionality, and we want to get that right,’” Wang said. “There’s no, ‘Oh, let me just polish this side app a little bit.’”

Imagine finding flow in a nine-to-five workday and you suddenly hit a roadblock. Without constraint, you’re breaking for a coffee, checking email, taking a lunch. “Working 40 hours [a week],” Wang said, “You probably only get 15 hours’ worth of work done.” 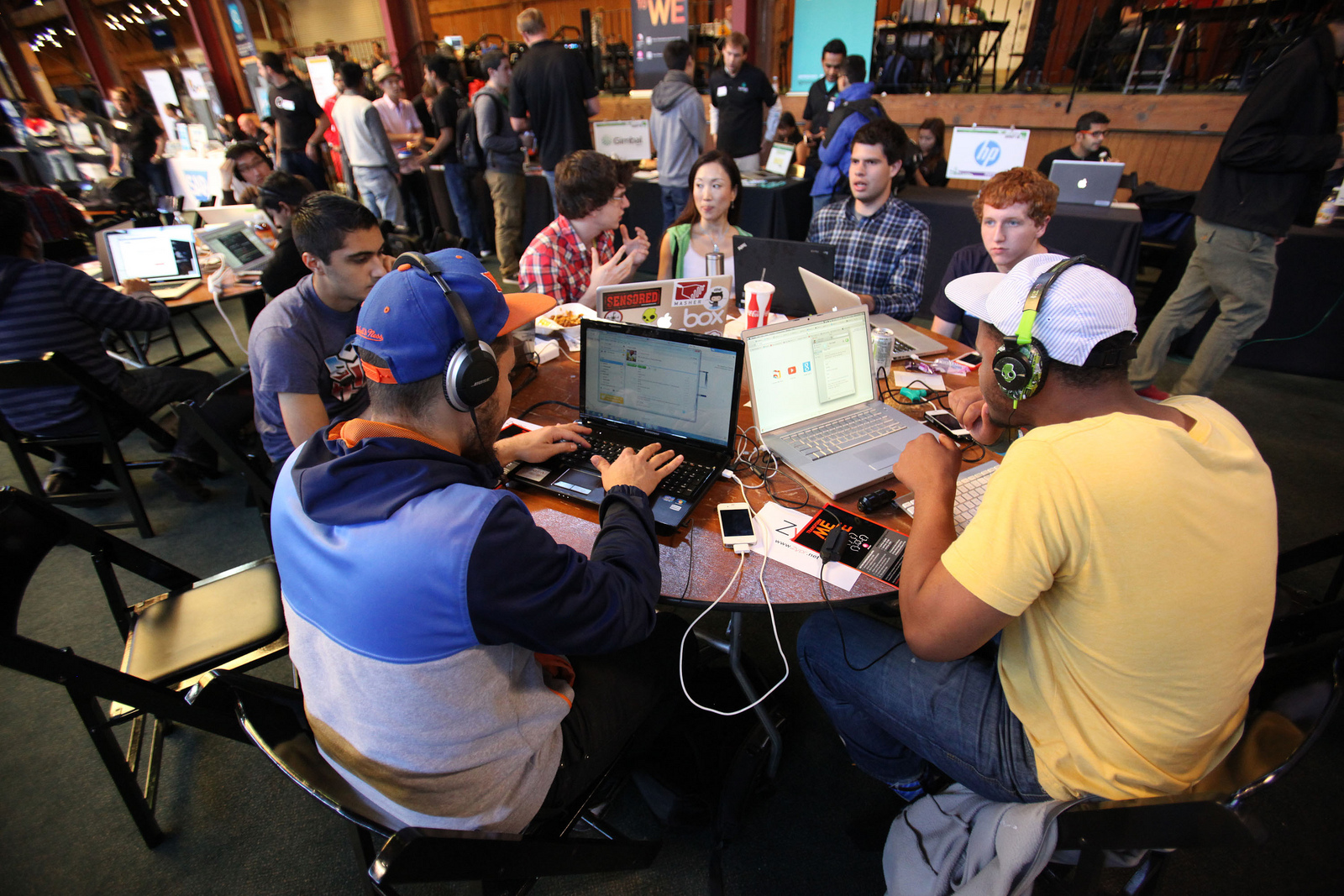 “I’d like for the entrepreneurs at UT to be as celebrated as the athletes,” Bob Metcalfe, inventor of Ethernet and now UTAustin Professor of Innovation, famously said. For those students building businesses overnight, Major League Hacking (MLH) is trying to make this a reality. Founded by Mike Swift, the MLH ranks the top hacking schools by total merit points earned, keeping the community aware of standings and scheduled hackathons.

“University hackathons have exploded recently,” says Swift. “I remember my first one (hackNY Fall 2010). There were like 100 people there and I thought it was absolutely insane that there were 100 people like me out there. These days, attendance is measured in 100s (maybe 1,000s soon). The fact that MLH was able to launch with so many high quality events is a testament to the explosive growth that’s happening.”

Swift has had a front row seat to the growth of hackathons in the past two years. Prior to MLH, Swift and two others founded Hacker League, a hackathon management platform that’s powered more than 400 hackathons. Regarding this growth, Swift said, “It also used to be a month or more between events. This spring it looks like there will be a student hackathon per weekend.”

If university hackathons are growing, hackathons taking place outside the college setting, free from needless restrictions, are skyrocketing.

In its fourth consecutive year, the Techcrunch Disrupt hackathon has seen massive following for its events in cities from San Francisco to Berlin. September’s San Francisco Hackathon gave away more than $40,000 in prizes to hackers of all ages. The free-for-all competition is working: Groupme, a group messaging application, sold to Skype for more than $43 million less than two years after its formation at the 2010 Techcrunch NYC hackathon.

Another company, Angelhack, stages a 35 city global hackathon – the latest one giving away more than $1 million in prizes. The company believes that, “the top founders of tomorrow will come from the developers of today.”

A Factory of Tomorrow’s Factories

At an economic time when innovative development is thirsted for, hackathons’ beautiful answer might be that under constraint creativity can prosper.

“My solution to the problem of unleashing creativity is always to set up a target,” Akio Morita, co-founder of Sony once said. “The best example of this was the Apollo project in the United States,” he continued, referencing President Kennedy’s promise to put a man on the moon before decade’s end.

For Wang, their potential is unlimited, “I think the next round of hackathons are going to be these old corporations, that aren’t necessarily known for being on the cutting edge, but are doing hackathons to inject that innovative culture.” Reiterating the can-do attitude hackathons create.

“Hackathons are actually going to be HUGE for the economy,” Fontenot said, looking towards the future. “Hackathons are pretty much factories … Input normal person, output hacker who not only can build shit but also can’t stop building shit. That is HUGE value.”

Fontenot and I had this conversation over Facebook chat – one of their many products built out of a Facebook internal hackathon. Others include their mobile framework, and the Facebook Timeline.

One of the greatest encapsulations of the essence of a hackathon comes from the CEO of Facebook, Mark Zuckerberg, writing in a letter to shareholders. “The Hacker Way is an approach to building that involves continuous improvement and iteration. Hackers believe that something can always be better, and that nothing is ever complete. They just have to go fix it—often in the face of people who say it’s impossible or are content with the status quo.”

Of companies creating tomorrow’s future, many will trace their development back to the hackathon. No longer hidden in a warehouse, the world is growing aware of their potential; hackathons are starting to see the light of day.
Photo credits: @ba2669 at Yalehacks, hacktx.com, Max Morse/Getty Images via flickr for Techcrunch.