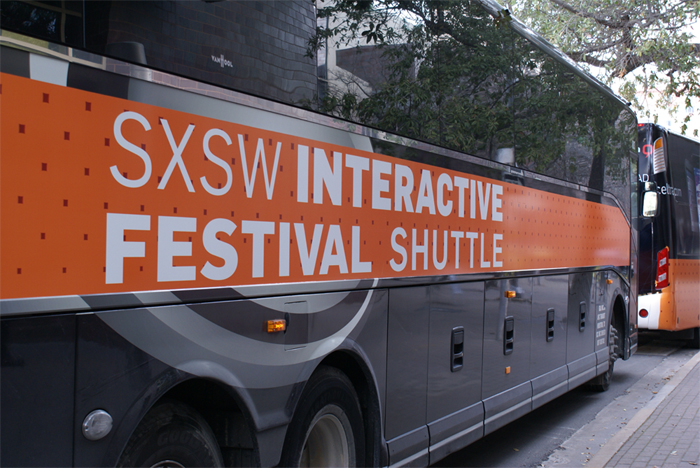 SXSW Shuttles line up outside the main convention center.

Editor’s note: This is the fourth journal in a series documenting Carl Shultz’s first time attending SXSW Interactive. Check back daily to read the rest of the series.

Before I started building a schedule for SXSW, I heard many people, “There’s so much going on, you end up doing nothing if you’re not careful.”

After four days, I completely understand what they meant.

Every day there are dozens of sessions happening in the several locations downtown, all covering a wide range of topics.  Some interesting, some not. Others sounding compelling, but turning out to be flops. The key is identifying the difference before you shuffle your way out of a room in the middle of a boring session.

As a generalist my interests lie in many of different fields. Naturally, I had a problem prioritizing the sessions. At the end of each hour, I would stress about having to choose which of the five sessions I circled on my schedule I would attend next.

During the time slot of Nicholas Cage, Mindy Kaling, and other celebrities were panels and discussions on topics that not only interest me, but could be exceptionally informational.

Others were trying to solve this challenge too. “It’s a balance thing” said festival attendee, Nancy Martin. “Luckily, I’m here with three co-workers, so we split up the sessions we all wanted to see and compare notes later.”

Ultimately, I made the decision to see most of the bigger names at the festival- Snowden, Assange, Tyson- and I’ll admit I snuck away to see Nicholas Cage and Mindi Kaling.  When was I ever going to have a chance to see them again?

Not all, but a few of the panels that I attended left a lot to be desired. Either the speakers were ill-prepared, the moderator had no control, or the topic just turned out to be less interesting than expected.

The bottom line is, it’s easy to waste time at SXSW. It’s important to be able to make the most of festival. Some come to soak up the culture and enjoy the city, which is awesome – there’s so much to explore.

I came hoping to leave a bit more enlightened; having learned as much as I possibly could from minds that I could only hope to aspire to. Even those celebrities I snuck away to see had so much to share.

Mar 14, 2014
Get our free newsletter
Latest headlines delivered to you weekly