For the right price, amateur shooters can make the same shots as world-class marksmen.

Austin company TrackingPoint promises accuracy, reliability and stability with its line of Precision Guided Firearms (PGF). These expensive rifles, equipped with state-of-the-art sensors and tracking technology, have drawn both national attention and controversy amongst gun enthusiasts, marksmen and control advocates. 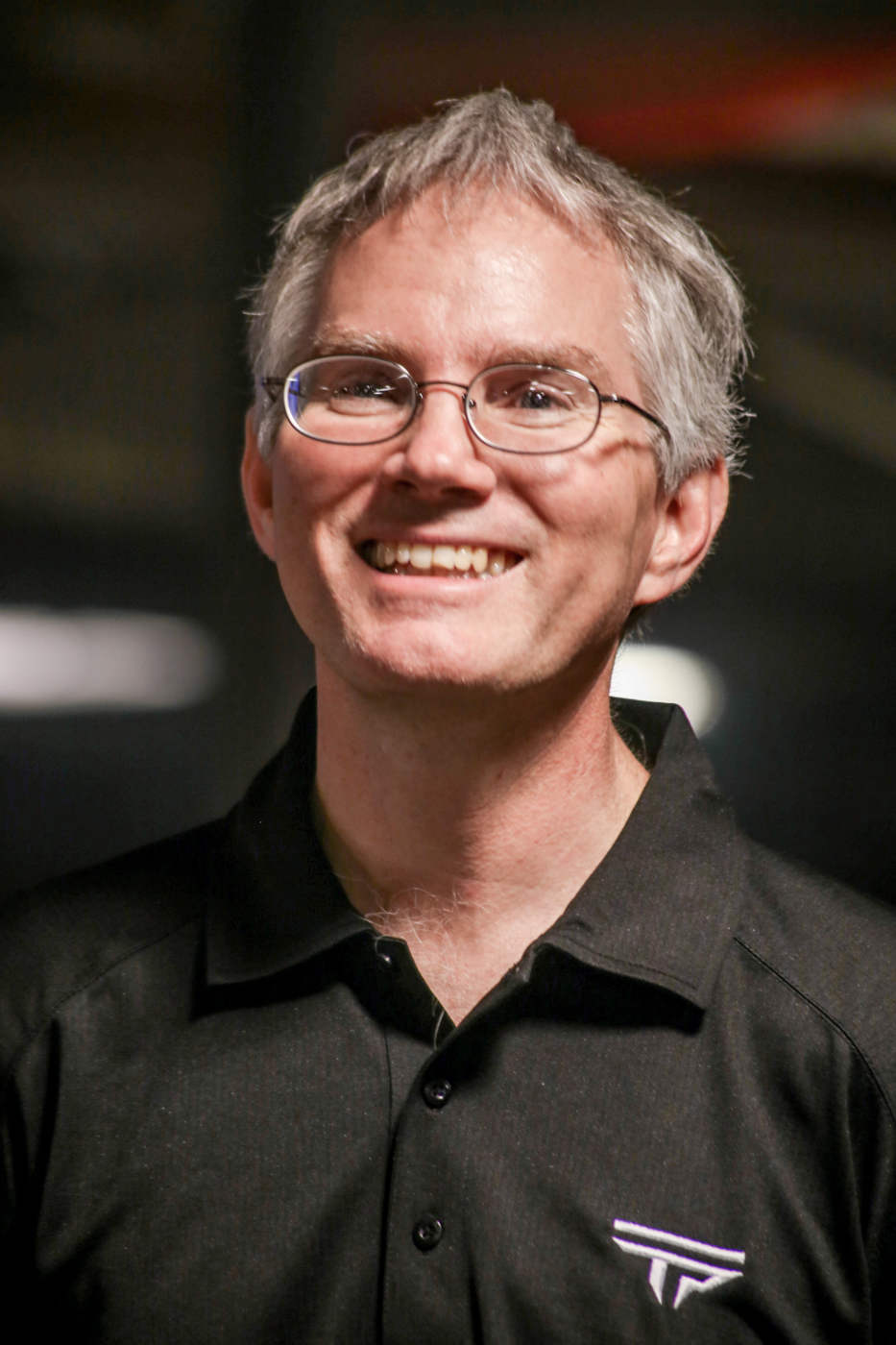 “When it comes down to the actual marksmen, the trained snipers, as you can understand, they’re not as excited about it,”

CEO John Lupher said at a hardware meetup in December. Lupher was unavailable for additional comments.

The current iteration of TrackingPoint’s rifles, its fourth generation, have been in the field for about a year—civilians with a big enough wallet can buy one of the guns, which start at $23,500. The top model sells for $27,000.

As of December, TrackingPoint had sold around 275 total systems in a seven-month span. TrackingPoint recently announced a less expensive line of semi-automatic rifles, each equipped with the same technology as its bolt-action rifles.

“It’s a very niche product. We actually found that raising our prices helped,” Lupher said. “These are going to multi-millionaire and billionaire types, and they want to have the latest, greatest thing, and the more expensive it is and the more exclusive it is.”

TrackingPoint is the brainchild of investor John McHale and made a reality by engineer and current CEO John Lupher. McHale, now a board chairman of the company, approached Lupher in 2009 after an African safari, and the two initially funded the project themselves. 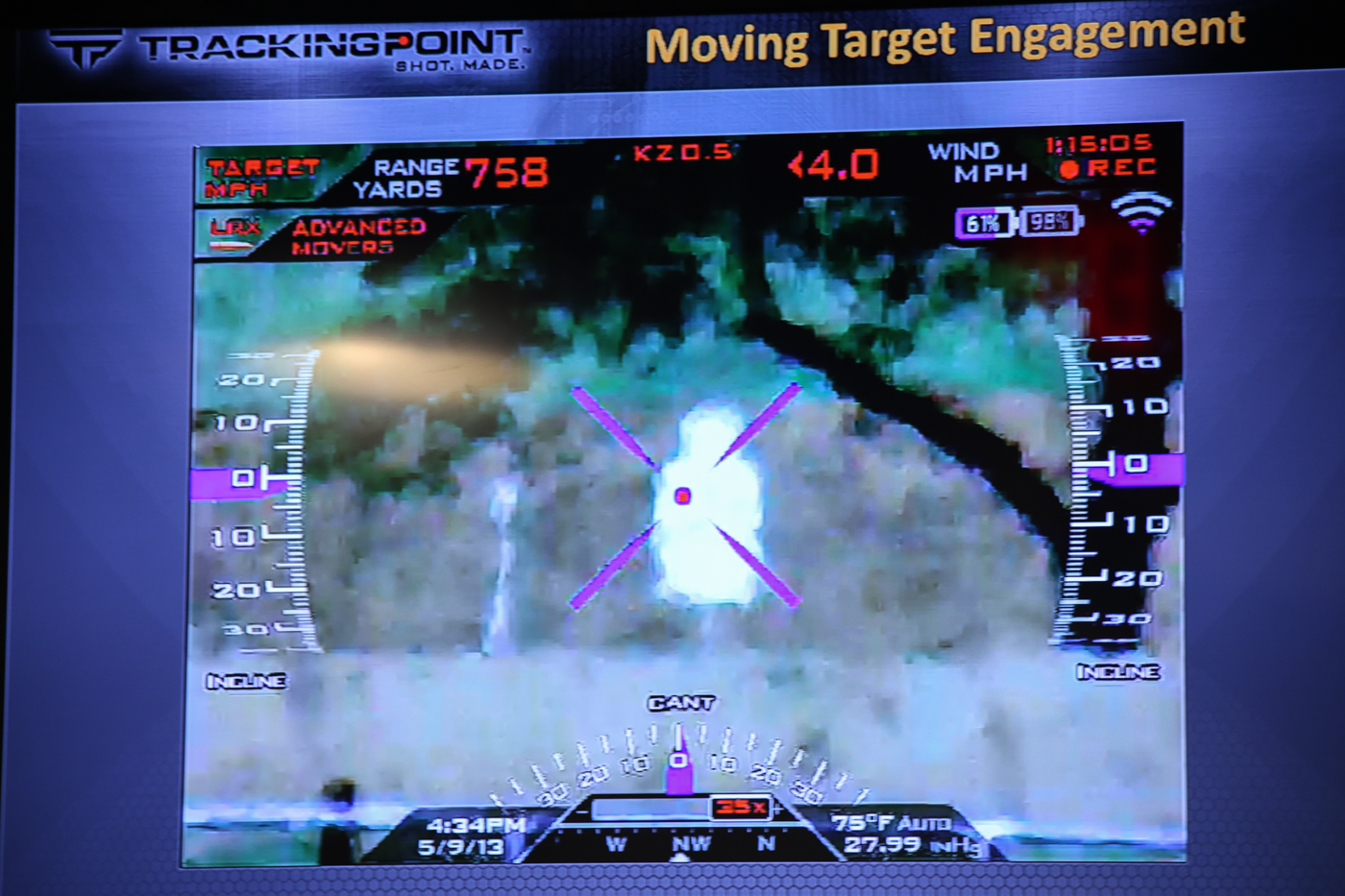 The view from the digital scope.

The magic of the PGF is in its digital scope—a system of seven processors designed to adjust for wind speed, temperature, target movement, Coriolis effect and the many human factors in what makes a long-range shot miss its intended destination. Each gun’s scope is linked to its trigger, and when the shooter marks his target with a red “tag” button, it takes a photo. The gun won’t shoot until the picture and what the shooter sees match up, leading to the perfect shot.

The system’s ballistics equation even takes into account a target’s velocity, making hitting a moving target—an impossible shot for most—a matter of tagging.

“It’s a fire-control system, it’s a target-tracking system, it’s also a ballistic computer that runs in realtime, and it’s also a high-precision hunting rifle, all combined into one integrated platform,” Lupher said.

The scope runs on a rechargeable battery pack that lasts for three hours, and even supplies its own Wi-Fi server, which gives shooters the ability to stream video of the display directly to a smartphone or tablet. Every TrackingPoint gun comes with an iPad Mini.

“The power of this system is not really any one piece of technology. The real power comes from the total integration of everything that you need to shoot long distance,” Lupher said.

TrackingPoint claims that its XactSystem, another name for the PGF package, is the most accurate long-range shooting system in the world. The company focused its development of the system around a 1999 Army study that looked at sniper performance and why snipers missed in battlefield conditions. The longest recorded shot with one of the TrackingPoint rifles, according to Lupher, is over two miles. 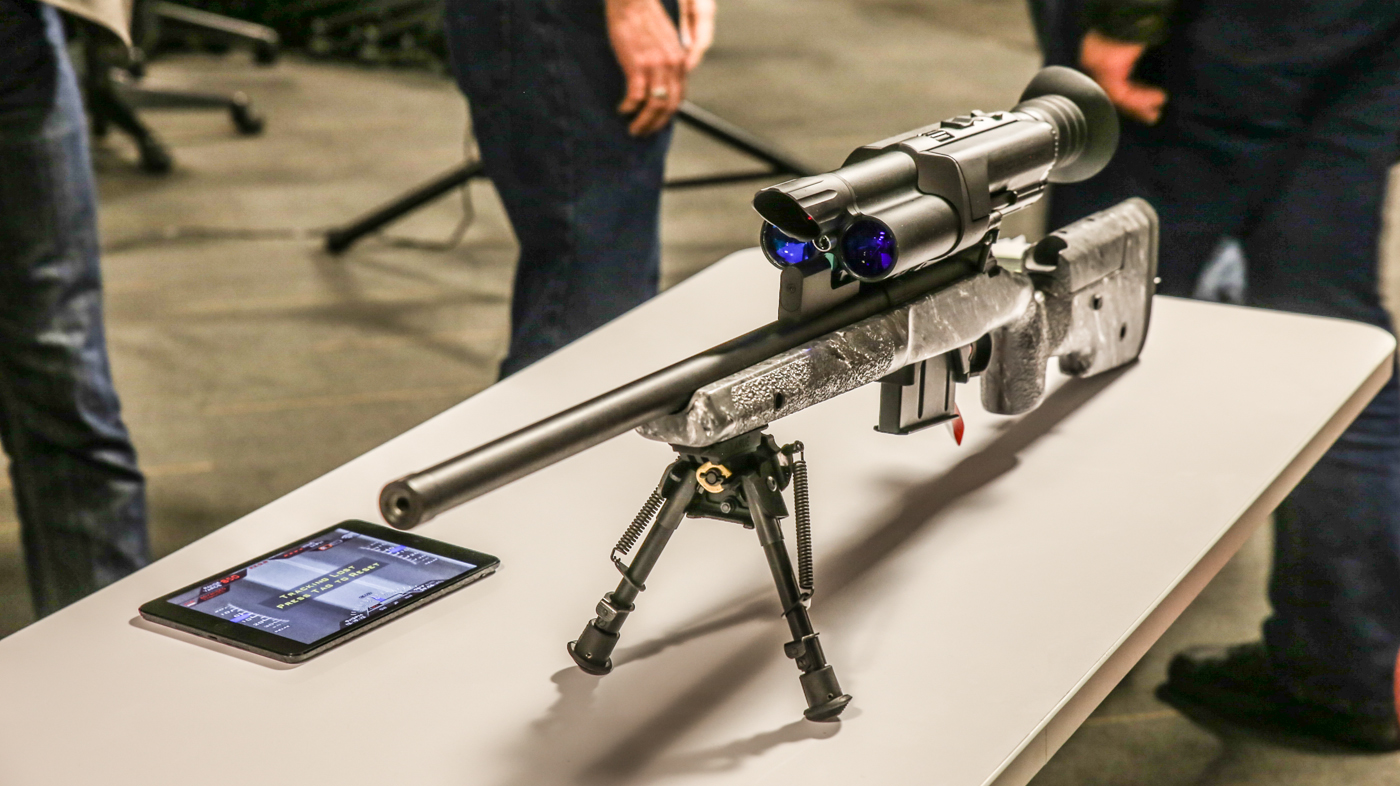 “We can take anybody of almost any skill level, if you have a basic rudimentary knowledge of shooting a rifle, you can come up and within 20 to 30 seconds of training, you can tag and engage targets and have over 80 percent on-target hits,” Lupher said. “We’ve had a consistent, continuous stream of reporters and customers who have been able to achieve those results.”

Marksmen disagree with Lupher, who claimed that the TrackingPoint could make an amateur competitive with some of the world’s best shooters.

“If you have someone who is very, very well-trained, they will beat that TrackingPoint all day long,” Jacob Bynum, owner and instructor at Rifles Only, said, but acknowledged that he does like the system.

“If you have someone who is very, very well-trained and they are shooting the TrackingPoint, whoever is downrange has a problem.” 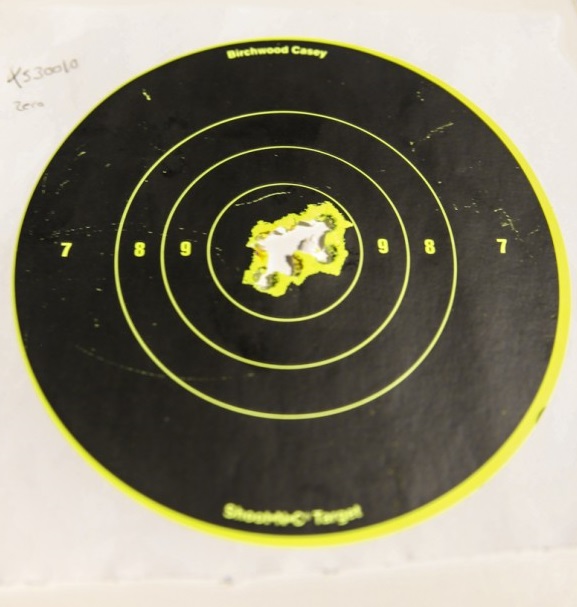 A bullseye every time.

According to a recent Fox News article, the U.S. military bought a number of TrackingPoint guns to test. Depending on whether or not they decide to contract with TrackingPoint, up-and-coming products might include technology to avoid friendly fire, squad communication and other battlefield-specific features.

“I don’t see them ever really going for it,” Dan Sanderson, the owner and chief instructor at VX Marksmanship in South Alvarado, Texas, said. Sanderson was a competitive shooter while in the Marine Corps, a Scout Sniper and an Iraq war veteran; he questioned both the weight and dependability of systems like the XactSystem.

“Until the system outshoots us, then we can actually talk competition-wise,” Sanderson said.

Fire from both sides

TrackingPoint has drawn the ire from both pro-gun and anti-gun camps. Some say that XactSystem can turn civilians into public threats, while trained snipers aren’t buying into it.

Slate’s Justin Peters, in a column condemning TrackingPoint, wrote,”I have nothing but disdain for the TrackingPoint, which exemplifies everything I hate about a gun culture that is quick to put firearms in the hands of people who neither respect nor know how to use them.”

TrackingPoint has been featured on both NPR and the Colbert Report, as well as in a number of national outlets, drumming up even more of what he referred to as “calculated controversy.” 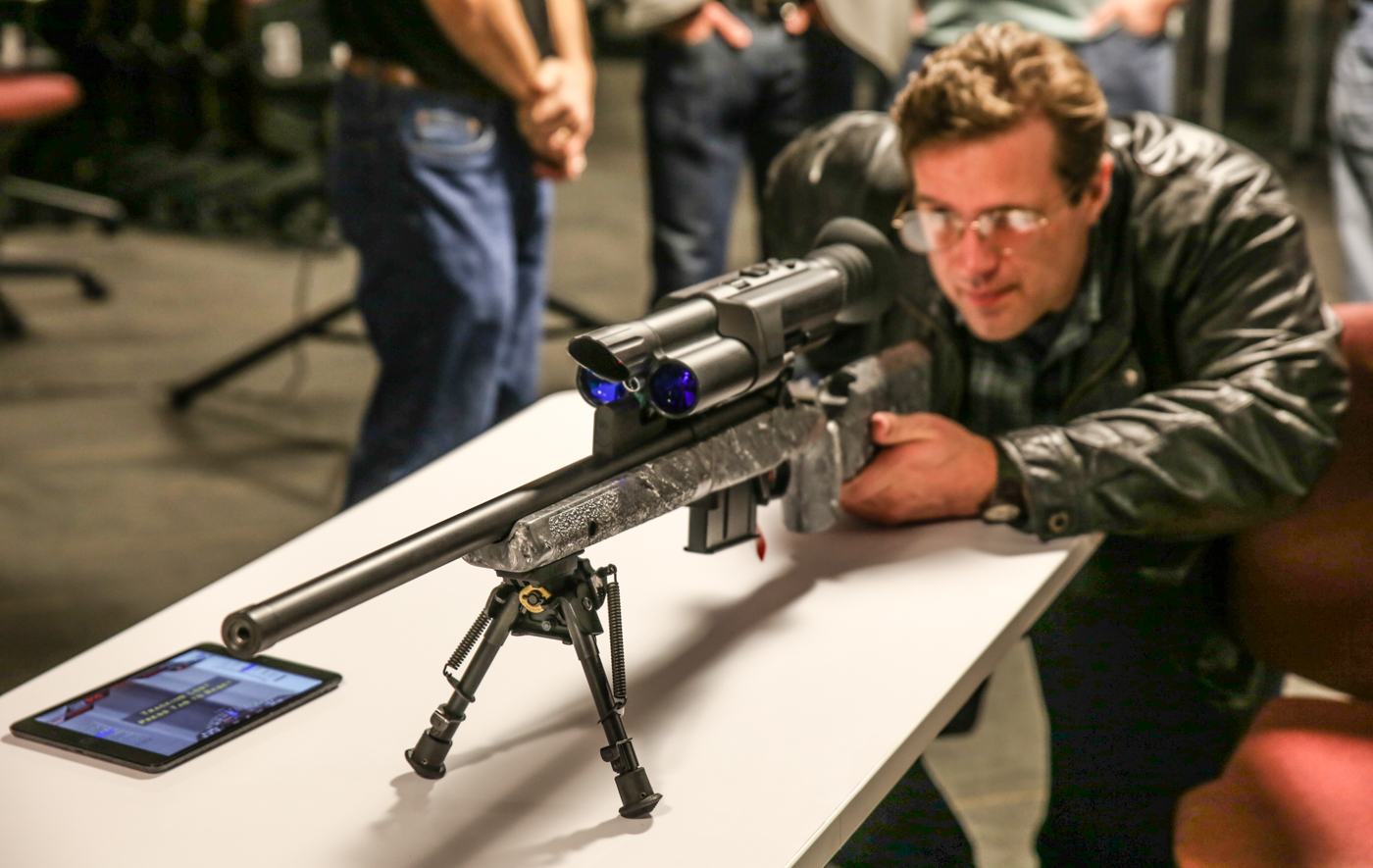 “Calculated controversy is something that we intentionally play up, and it gets us media hits and it’s good for business in general,” Lupher said.

Trained marksmen have criticized the system’s inability to automatically account for wind. Users have to manually enter in the windspeed and direction, but Lupher said that his engineers are developing a wind measurement system.

“The hardest aspect of this is judging the wind, and TrackingPoint doesn’t do it yet,” Jacob Bynum said.

According to Bynum, however, though the system isn’t perfect, it’s an important step in the right direction, especially in terms of safety, and likened TrackingPoint to the addition of airbags in cars.

“We want technology to go forward, we want to technology to accelerate to where we one, are able to hit the target that we’re looking at, and two, reduce collateral damage,” he said. “We should use TrackingPoint, because while TrackingPoint doesn’t have it exactly right, they’re on the right track.”

“A lot of the people that are complaining about TrackingPoint don’t understand TrackingPoint. They’ve never shot one,” he said.