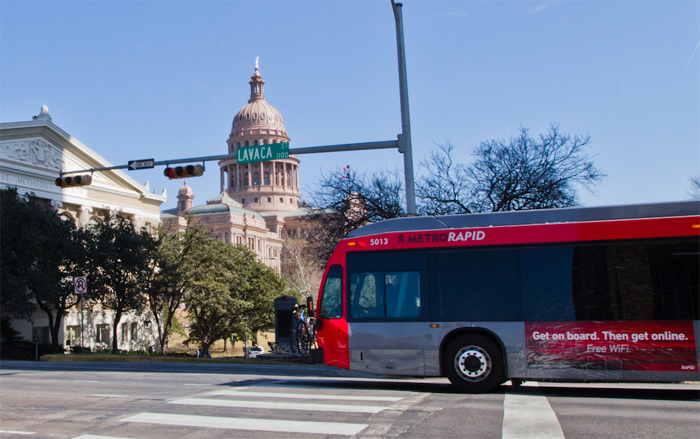 CapMetro has started to answer Austin’s cries to solve the city’s traffic problems.

MetroRapid, CapMetro’s newest project, is a rapid transit system that uses technology to make the commuter’s trip easier and faster. The route, introduced last month, runs from Tech Ridge to Southpark Meadows via North Lamar/South Congress. It is the first rapid transit bus service in Austin and was CapMetro’s answer to the city topping the chart as the fastest growing in the nation.

MetroRapid is the first portion of Project Connect, a regional effort to improve  transportation within central Texas by alleviating traffic congestion. Project Connect includes a second MetroRapid route, which will launch later this year, and incorporation of the MetroRail, launched in 2011.

The MetroRapid buses are brand new and “articulated” by connecting two buses in one.

“It gives the image of a light rail on wheels as opposed to a traditional bus,” said Joe Ianello, the Chief Information Officer for Capital Metro.

Joe Ianello, said MetroRapid is based on a conglomeration of other U.S. cities rapid transit systems.

“We built [MetroRapid] based on extensive research on experiences other agencies across the country have had,” he said. “It was a collaborative effort across all of [CapMetro] to plan and implement the new service.”

MetroRapid is different from the traditional CapMetro buses in a variety of ways. For one, the buses are larger – capacity for 40 more than the traditional buses – have more comfortable seating and are equipped with Wi-Fi. Ianello said that after 20 days of service, they had more than 50,000 visits to the Wi-Fi network. 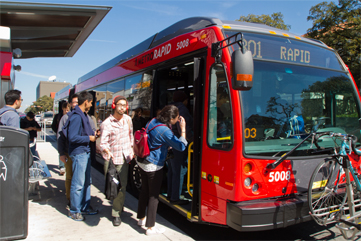 The MetroRapid buses are almost twice as long as what citizens are used to.

“We feel good about that because we were hoping passengers would make use of it and [the number of users] surpassed our expectation,” he said.

Aside from the new amenities, MetroRapid utilizes technology that assists passengers in having the most seamless trip possible. The most notable of the features is the traffic signal priority service. A collaborative effort with the City of Austin, technology on the vehicles communicates with the traffic signals at each intersection along the route. Under certain conditions, such as if the vehicle is running behind and it’s approaching the intersection with a green light, the system will request to hold the green light for a longer period.

“This allows us to keep the frequency as high as we’d hoped,” Ianello said. “This is technology that isn’t that visible but is very important for the service.”

Another feature is the new dynamic message signs at the various MetroRapid bus stations. The vivid, digital signs allow the passenger to know the real time location of the next two buses.  An app. for this feature is available on the CapMetro website.

Launched the same day as MetroRapid, the app is available for all of CapMetro’s services on Apple iOS, Android and Microsoft.  Users can purchase tickets, plan a trip and figure out when the next bus will be arriving at their stop. Ianello said they had close to 8,000 downloads in the first 20 days.

The MetroRapid project cost $47 million. Eighty percent of that was funded by a grant from the Federal Transportation Administration while 20 percent came from local funding.

The new service has gotten mixed reviews, per a slew of Reddit discussions that outline – often quite brashly – the reasons why the service just doesn’t cut it. Reddit user mindfields88 was underwhelmed by MetroRapid and feels it’s not enough to solve Austin’s traffic problems.

“CapMetro proves, once again, that Austin can’t handle public transportation,” they said “We need fast, 24-hour routes that supply access to ALL parts of the city.”

Another Reddit user said the app was not accurate and did not minimize his waiting time.

“The estimated arrival times are not accurate,” said pavlovs_log. “Yesterday I got to my stop three minutes before the arrival time on the app and saw it change to departing then just skip the bus that was supposed to arrive. I saw two Rapid buses pass my stop as “Out of Service” that registered on the app. I waited an extra 15 minutes because of that.”

Although it has been less than 30 days since the official launch, Ianello said they are pleased with the results they are seeing and expected the first month to be a time of learning and change. 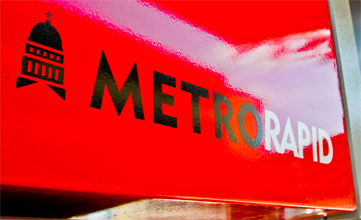 With their bright red finish, MetroRapid buses are hard to miss.

“Even though there was extensive testing from every angle, nothing replaces the real world experience,” he said, noting there were many simulation days with vehicles on the road to prepare operators and test the features before the official launch. “Everybody said no matter how well prepared you are, expect the first month to be a ramp up period, dealing with all of your customers, real life traffic situations and more.”

Ianello said MetroRapid was launched now because of Austin’s exponential growth. Although it’s good for the city overall, the growth has had a significant impact on local traffic. Currently, Austin is ranked fourth in North America for most congested metros.

“Given the growth, that continues, mass transit can play a part of that solution” he said.

Ianello said MetroRapid is not only meant to make current commuters trips easier but also to attract other Austin residents to utilize public transit.

“We could get people to make less use of their cars and part of that will help to in some way to alleviate the traffic issue as the city continues to grow.”

Photographs by Savanna Rose for Techzette.com